Earlier this year, the CBS All Access streaming service was rebooted and rebranded as Paramount Plus. In the not-too-distant future, genre films like a Pet Sematary prequel and the next Paranormal Activity sequel are going to be released directly to Paramount Plus – but while we wait for that to happen, the service already has several horror titles that are available for subscribers to watch. Listed below are some of the Best Horror Movies on Paramount Plus:

You don’t often see director Ralph S. Singleton’s Stephen King adaptation Graveyard Shift ranked highly among the films based on the author’s works, but we here at Arrow in the Head have always had a soft spot for this bugnuts movie about a textile mill in small town Maine that has a serious rat infestation. The infestation is so bad, there’s even a giant rat-bat creature lurking in the place and picking off employees. When you mix a set-up like that with a scenery-chewing performance from Stephen Macht and an appearance by Brad Dourif as a monologuing Vietnam veteran, you have the makings of a very entertaining 86 minutes.

Director Gary Sherman moved on from the difficult, heartbreaking production of Poltergeist III by taking the helm of the thriller Lisa, which – much like Sherman’s own 1981 film Dead & Buried – is underseen and underrated. Staci Keanan plays the 14-year-old title character, who plays a dangerous game where she calls up an older man and pretends to someone within his age range. She finds out how dangerous this is when she catches the attention of Richard (D.W. Moffett), who happens to be the “Candlelight Killer” that has been terrorizing the city by sneaking into apartments and strangling women. Co-starring Cheryl Ladd of Charlie’s Angels as Lisa’s mother, Lisa has been one of my favorites for thirty years now. If you haven’t seen it yet, it’s well worth checking out. 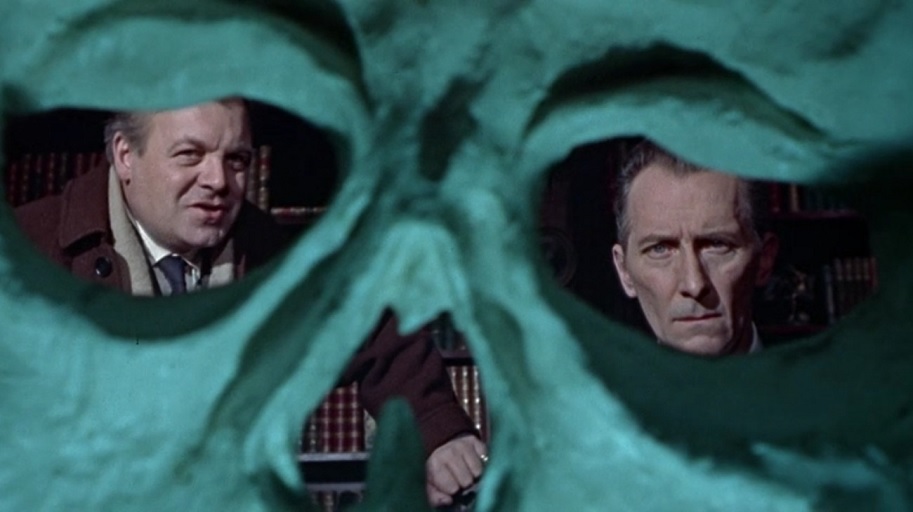 Sometime after the infamous Marquis de Sade passed away, his skull was removed from his grave for phrenological examination – and was lost. An Amicus production directed by Freddie Francis and based on a story by Psycho author Robert Bloch, The Skull posits that the Marquis de Sade’s sexually charged, sadistic, blasphemous writings/behavior were the result of him being possessed by an evil spirit, a spirit that still resides with his skull, which ends up in the hands of collector Christopher Maitland (Peter Cushing). Amicus was best known for their horror anthologies, and The Skull struggles to reach 83 minutes, so it feels like it should have been a short in one of their anthologies. Padded though it is, it’s an interesting film that has Cushing and “guest star” Christopher Lee dealing with a possessed skull, and most of the last third is a wordless sequence of Cushing tripping out with this evil skull that sits on his table. 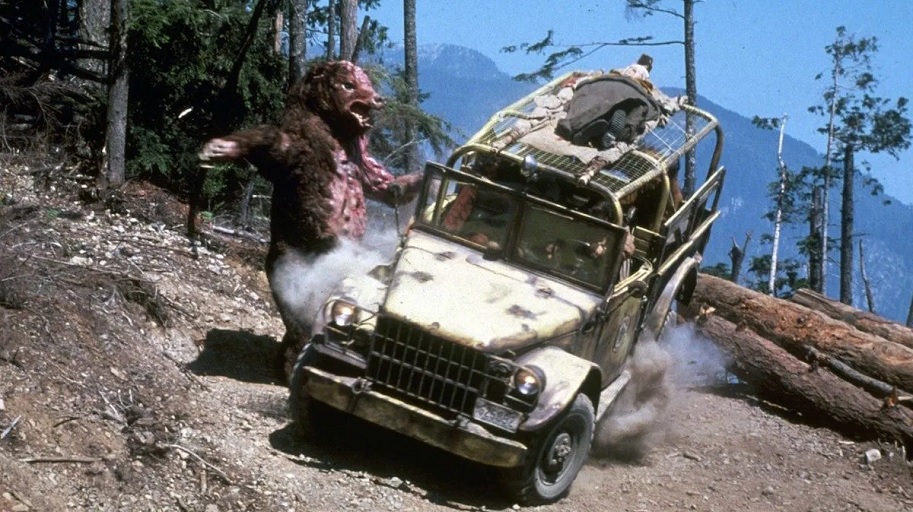 Director John Frankenheimer’s “nature run amok” environmental horror film Prophecy doesn’t have a good reputation, but if you can get on its wavelength it’s actually extremely creepy. The story follows a couple (Robert Foxworth and Talia Shire) who have been sent into the Maine wilderness by the EPA to look into a dispute between a Native American tribe and a paper mill. What they discover is that something this paper mill is doing is having a serious impact on the environment, resulting in large, mutant creatures. What makes this especially unsettling is the fact that Shire’s character is pregnant, so we know she should not be in this area. The longer she’s here, the bigger the risk to her unborn child. Then there’s a rampaging mutant bear (Jason Lives director Tom McLoughlin and Predator‘s Kevin Peter Hall both wore the costume) that sometimes looks goofy going after its victims, but there are some great moments involving this thing as well. 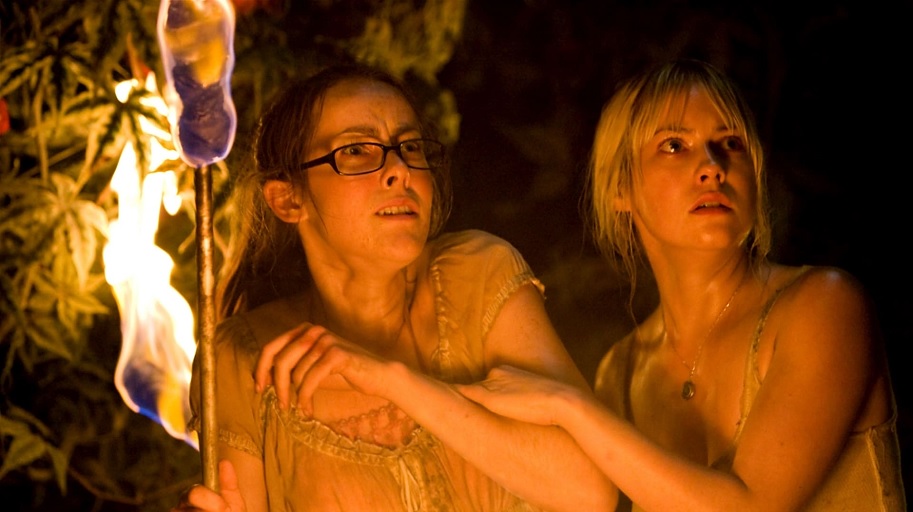 Directed by Carter Smith and based on a novel by Scott Smith, The Ruins may be one of the most unjustly overlooked horror films of the last fifteen to twenty years. The story centers on a group of tourists vacationing in Mexico who decide to check out a Mayan temple, the ruins of the title. As soon as they touch this vine-covered, ancient structure, local villagers show up and freak out on them, forcing them to climb to the top of the temple. If they try to leave, they’ll be killed. Why have the locals trapped them on this temple? It takes a little while for the tourists to figure out exactly what’s going on here, but once they do the situation just gets increasingly dire, disturbing, and disgusting. If the Jordy Verrill segment of Creepshow had a love child with the Raft segment of Creepshow 2, the result would be something like this movie. It’s quite intense, and the cast did a great job with the material.

Based on the true story of two lions that killed dozens of people during the building of a railway in 1898 Africa, this “nature run amok” thriller from Predator 2 director Stephen Hopkins stars Val Kilmer as bridge engineer John Henry Patterson (the man who lived the story and wrote the book the film is based on) and Michael Douglas (doing his best to steal the movie from Kilmer) as famous hunter Charles Remington, a character screenwriter William Goldman created. Goldman pitched the film as “Jaws meets Lawrence of Arabia” and you can see a bit of Jaws in the structure; a bunch of lion attacks and unsuccessful attempts to stop the beasts builds up to Patterson and Remington going on an extended hunting trip, and taking a break to get drunk in the midst of it. Aside from Kilmer’s misguided attempt to do an Irish accent, this is a great flick, which is why we’ve also featured it in our “Best Horror Movie You Never Saw” video series.

Although Vincent Price never worked for Hammer Films, a lot of genre fans seem to think he did. Movies like director Gordon Hessler’s The Oblong Box are what give that mistaken impression; it feels like a Hammer movie, Christopher Lee is in the cast (and yes, Price and Lee do share a scene… for about 30 seconds), but it’s not Hammer. It’s from American International Pictures. Price plays a man who keeps his disfigured brother chained up in their family home. Eventually that brother escapes, puts on a mask, and starts cutting throats, making this something of a precursor to the slasher film. The Oblong Box isn’t a great movie, but it’s worth a watch to see Price, Lee, and some slashing.

Inspired by the William Hjortsberg novel Falling Angel, writer/director Alan Parker’s Angel Heart is set in 1955 and stars Mickey Rourke as Harry Angel, a private investigator based out of New York who is hired by a strange fellow named Louis Cyphre (Robert De Niro, allegedly emulating Martin Scorsese to play this character) to find a crooner named Johnny Favorite. This investigation gets dark and strange very quickly, and it only gets weirder and bloodier as the film goes on. Angel follows Favorite’s trail to New Orleans, where voodoo enters the picture, and so does Lisa Bonet as a girl named Epiphany Proudfoot. At just under 2 hours, Angel Heart is a bit long-winded, but it’s a good movie that turns an old school P.I. story into a supernatural mind-bender. 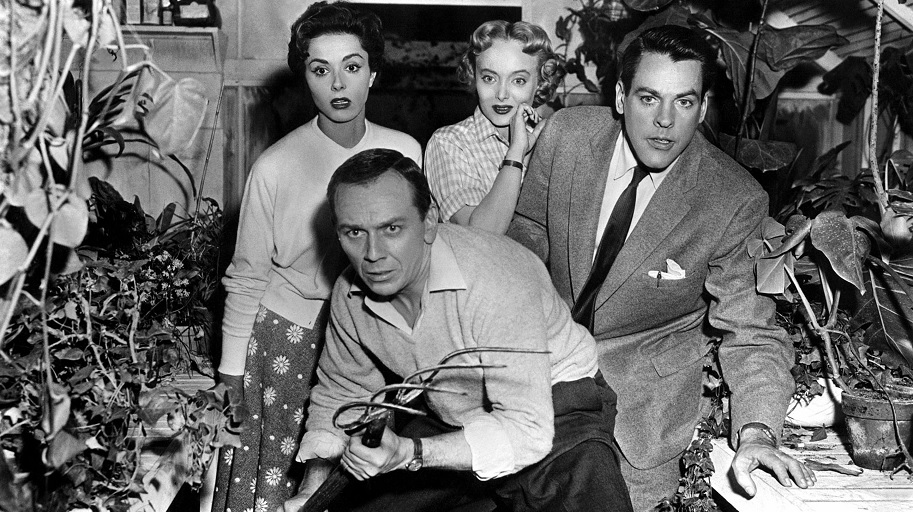 INVASION OF THE BODY SNATCHERS (1956)

Fifteen years before gifting the world with Dirty Harry, director Don Siegel brought us the sci-fi horror classic Invasion of the Body Snatchers. The legendary Kevin McCarthy stars as Dr. Miles Bennell, who is faced with a weird situation in his small hometown of Santa Mira. Some of the locals have become convinced that their loved ones are no longer their loved ones, that they have been replaced by emotionless imitations. And they’re correct. Alien duplicates of the locals are growing out of seed pods and taking over the lives of the people they resemble. Soon these aliens will branch out of Santa Mira and spread all over the world. The number of people Miles can trust is quickly reduced in this tale of fear and paranoia, and it’s very unnerving to think of everyone around you becoming alien pod people who no longer have feelings and only want to make you one of them. This is a great film that also inspired one of the best remakes ever.

Directed by Steven Spielberg’s longtime collaborator Frank Marshall, Arachnophobia is about a California town being overrun by a new species of spider that has venom so toxic it can kill a human being with one bite. Jeff Daniels stars as the arachnophobic local doctor who has to deal with the situation, while John Goodman has a memorable role as an exterminator. Marketed as a “thrill-omedy” due to its mixture of thrills and humor, Arachnophobia is a really fun movie that’s likely to give anyone with the titular fear some serious nightmares. It was a box office success in 1990, but you don’t seem to hear about it often enough these days. That’s a shame, because it’s a great entry in the Amblin filmography.