Plot: An idyllic American town is thrown into chaos after a vintage ‘Good Guy’ doll turns up at a suburban yard sale. Soon, everyone must grapple with a series of horrifying murders that begin to expose the town’s deep hypocrisies and hidden secrets. Meanwhile, friends and foes from Chucky’s past creep back into his world and threaten to expose the truth behind his mysterious origins as a seemingly ordinary child who somehow became this notorious monster.

Review: The Child’s Play franchise has been very hit or miss over the years. Starting out as a slasher, writer/director Don Mancini’s creation has had six sequels as well as a recent reboot, each successively going more and moreover the top. I mean, when your antagonist is a doll possessed by a serial killer, you aren’t exactly beholden to realism. Now, the saga continues on the small screen in the ambitious new series Chucky which continues the storyline from where we left off in 2017’s Cult of Chucky with a mix of the excess of the last four films with the horror of the first three. While the series starts out a little rocky, Chucky begins to find its footing and the result is a very enjoyable horror story that may be the best entry in the Child’s Play franchise since the original film.

Set in Hackensack, New Jersey, Chucky does a great job of continuing the film series without rehashing too much. Rather than recap the events of the films, the series starts with the infamous Good Guy doll being picked up by teen Jake Wheeler. An aspiring artist, Jake lives with his father (Devon Sawa) who struggles with his son’s homosexuality and being a single parent trying to make ends meet. Jake’s cousin Junior (Teo Briones) is a popular athlete dating mean girl Lexy Cross (Alyvia Alyn Lind), both of whom bully Jake. Jake has a crush on classmate Devon, a true-crime podcaster. With Chucky in his life, those around Jake begin to die under mysterious circumstances.

Over the four episodes made available for this review, Chucky (once again voiced by the great Brad Dourif) gets up to his old habits which results in some truly grotesque kills. He also waxes philosophical about his victims which leads to the central conflict of Jake rejecting his new friend’s evil plans while also contemplating if the victims truly deserve it. Bullying is a very real concern today and this series approaching it as a motivation for murder is a risk that works within the context of the story. It also manages to deliver a fresh take on the formula of this franchise while staying true to the prior films. I caught multiple references to the earlier movies in these four episodes while still waiting for the appearances from Alex Vincent as Andy Barclay, Fiona Dourif as Nica Pierce, and Christine Elise as Kyle.

While the series is a lot of fun, it does take a while to find its rhythm and suffers from a couple of problems. The first is the dialogue. In the first few episodes, the characters are written poorly with profanity feeling way out of place. While this is certainly not a PG-13 affair, parents, and teachers freely drop F-bombs with kids in a way that doesn’t seem remotely realistic. The teen characters are all middle-school-aged and yet do not talk like any real 14 or 15-year-olds. After the series setup is out of the way, the third and fourth episodes begin to focus more on the relationship between Jake and Chucky as being more of a mentor and apprentice dynamic as well as unleashing the kills. Let’s face it, we are watching this series for the inventive deaths and Chucky does not disappoint in the early going with one death involving knives and a dishwasher as being especially creative.

The other problem I had was with the unnecessary inclusion of an origin story for Charles Lee Ray. With the long-form approach that a television series offers, Don Mancini had the opportunity to explore a lot more than he ever could with a two-hour feature film, but including the childhood start to Chucky’s murderous ways feels overdone. Audiences don’t need to know about Michael Myers, Freddy Krueger, Leatherface, or Jason’s formative years. While this approach has worked in series like Bates Motel and Hannibal, Chucky is a character that doesn’t need motivation. As a serial killer in a possessed doll with seven movies under his belt, telling us why he is the way he is is arbitrary. I respect that Mancini and his team are using this series to add to the Child’s Play mythology, but if feels a bit forced.

With Channel Zero’s Nick Antosca on board as producer, Chucky benefits from having a solid production budget and the support of a network well versed in genre offerings. Every Child’s Play movie has been fun in one capacity or another, but Chucky is the first entry since the 1988 original that I really liked a lot. A really solid mix of dark humor and violent slasher kills, Chucky is a great watch this Halloween season. Sticking with the first two uneven episodes will pay off as the show finds a murderous stride by episode three. I am definitely looking forward to seeing how the series connects the cameos from the franchise in the second half of the season. Here’s hoping that this is the first of many bloody good times featuring our good guy friend to the end.

Chucky premieres on October 12th on SyFy and USA Network. 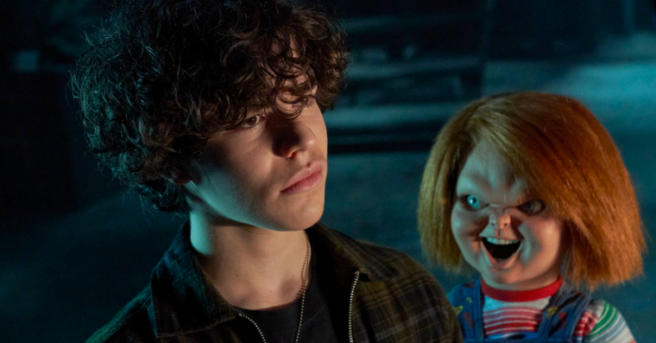