REVIEW: Mike Mills is quickly becoming one of my favorite directors. While Thumbsucker was decent, his follow-up, Beginners, was terrific, and his last one – 20th Century Women – was one of my favorite movies of that year. C’Mon C’Mon is, for me, maybe a tiny cut below those last two. However, it’s still an affecting tribute to family and responsibility, anchored by one of Joaquin Phoenix’s most accessible performances in years.

Here, he plays a refreshingly average guy. His character, Johnny, makes audio documentaries for an NPR-style organization and just so happens to be recording interviews with kids giving their insightful takes on childhood when he’s interrupted to look after his sister’s kid. A single mother, Viv (played by the great Gaby Hoffman), has to leave town to look after her ex, who’s just had a crippling manic episode, leaving Johnny to watch young Jesse (Woody Norman).

Unlike many other, similarly themed movies, Jesse’s not some wisecracking kid with an adult sensibility. Here he’s just a kid, prone to moments of spite and irritability, although he and Johnny quickly take to each other. Having been out of the kid’s life for a year, thanks to a family argument, Johnny is thrust into a father-figure role and proves to be up to the task.

Mills’ film goes to great lengths to avoid being melodramatic or sentimental. Instead, he seems bent on making an utterly realistic film about changing family dynamics and the experience of being both a parent and child in a world where the nuclear family model often doesn’t apply. To that end, he splices in lots of documentary footage of children being interviewed by Phoenix (as the character he’s playing), giving their two cents on how they feel and what it means to be a child in the 21st century.

Thematically, it’s very much in line with Mills’ other films. Thumbsucker was about suburban malaise, while Beginners was about the relationship between an adult who’d been lied to his whole life and the father it turns out he never really knew. 20th Century Women was a tribute to the community of women (and one man) who raised Mills, while C’Mon C’Mon seems to be about the changing nature of fatherhood. Here, while loving, Jesse’s dad (played by Scoot McNairy) isn’t able to manage himself, never mind a family. His mother does it all, but at the same time, she’s also forced into a caregiver role for her ex, leaving Phoenix’s more than willing Johnny to help pick up the slack.

It’s a very optimistic film, with the notion throughout being that Johnny’s going to not only reconnect with his sister through Jesse but also come to terms with his disappointments in life as he enters middle age. Phoenix hasn’t played such a down-to-earth role in a while, and it’s nice to see him play a happy, secure guy who’s a positive influence on everyone around him. Hoffman also has a great part as Jesse’s devoted mother, who, nevertheless, has lost a certain sense of self by needing to focus all of her attention on her son and ex. She doesn’t NEED help, but she could certainly use it, and the way she and Johnny start to reconnect feels authentic and uplifting in a low-key way.

Like a few other recent family dramas, Mills opted to shoot C’Mon C’Mon in black and white, which seems to be the new trend now (just like window-boxed 1:33:1 academy ratios were the indie rage a few years ago). It’s a good-looking film, and the black and white does indeed make the film feel more intimate, while the documentary inserts are an intriguing complement to the narrative.

C’Mon C’Mon is another solid entry into Mills’ small but excellent filmography. It’s rare to see a filmmaker with the razor-sharp focus he has, but he’s done four exceptional moves about family, and I hope he does many more. 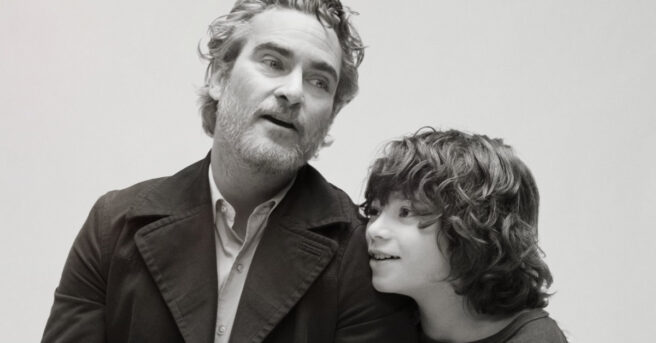 Drago spinoff with Dolph Lundgren could be in the works

Adam McKay takes the blame for his split with Will Ferrell

Dolph Lundgren says sequel will be even better than the first

The Reason Why Music Plays While On Hold Started Because Of...