PLOT: An elderly cowboy (Clint Eastwood) is hired by his former boss (Dwight Yoakam) to bring him his son (Eduardo Minett), who’s living in Mexico with his mother.

REVIEW: You’ve got to hand it to Clint Eastwood. At ninety-one years old, not only is he still directing movies, but he’s starring in them too – while shooting them amid a global pandemic. A true icon, Cry Macho is his first western-themed film since Unforgiven, although it’s more of a Neo-western with its 1979 setting. There are no six-guns and shoot-outs in this one, but it’s still a pretty compelling character study with Clint delivering a vulnerable performance in the lead.

The film is based on a book by N. Richard Nash (who co-wrote the screenplay), and it seems to have been written for a younger man than Eastwood, but who cares? Clint is among the greatest global icons of all time, and if he thinks he’s convincing as a former rodeo champ who fell off the wagon “some years back,” who am I to argue? While looking his age, Clint seems to be still sharp as a tack and delivers an energetic performance as the crusty cowboy.

One thing that’s interesting about Cry Macho is how Eastwood seems keen to deconstruct the idea of being “macho.” His young apprentice in this, Eduardo Minett’s Rafo, is obsessed with being manly, even naming his pet rooster (who he uses in cockfights) “Macho.” Eastwood’s Mike Milo laughs at his attempts to be manly, and throughout the film, teaches him that performative tough guy shtick won’t get you far. You’re either tough – or you aren’t. And make no mistake, Eastwood, in his ninth decade, is still tough.

Eastwood has always been one to deconstruct the cowboy mythos, going back as far his The Outlaw Josey Wales, which seemed to be a direct answer to his popular “Man With No Name” character. Josey Wales had a name and a past, and the movie started with him failing to protect his family and crying over their graves. In Cry Macho, Eastwood cries again, and this softness doesn’t make him any less of a man. The gentleness of his character seems more authentically Eastwood than any he’s played since Million Dollar Baby, with him shown here to have a love of animals and a kind way with them.

By contrast, Rafo’s drunken, aristocratic mom Leta (Fernanda Urrejola), sends a tough guy hooligan after them that’s laughably easy to outsmart time and time again. Perhaps a more imposing villain would have given the film a little more excitement, but then again, this is more of a mood piece than anything. Eastwood’s character has a nice, chaste romance with a local woman, Marta (Natalia Traven), who takes care of them when they wind up stranded in her town, and it’s fun to watch Eastwood light up on-screen in this way. He’s rarely gotten the chance to play happy in recent years, and it’s a nice departure.

While Cry Macho is Eastwood’s show all the way, Minett is likable as the kid he takes under his wing, with them, by contrast, not immediately at each other’s throats. It doesn’t take long at all for either to win the other over, and their Grandfatherly relationship is – for lack of a better word – nice. Dwight Yoakam, who’s always been a solid actor, is believably conflicted as Eastwood’s boss, who has not-so-fatherly reasons for wanting his son back. At the same time, Traven is excellent as Marta, Eastwood’s love interest.

As with most Eastwood movies, the pacing is deliberate, and the story is relatively simple. It delights in the quiet moments and relationships between people, and you either go with it or don’t. His movies have never been made for the cynical, and Cry Macho is no exception. He may be old, but he’s far from done, and Cry Macho is a nice vehicle that I would call his on-screen swan song, but with Clint, you never really know, do you? 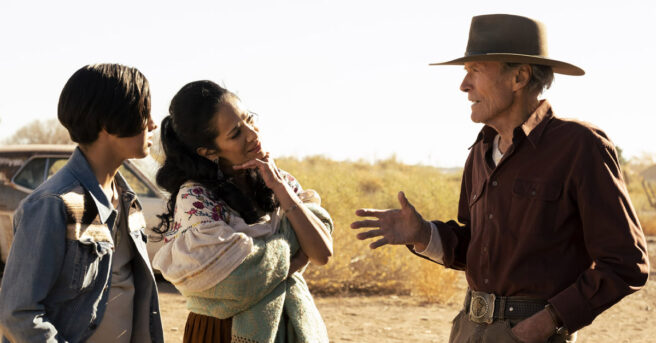 MOVIE POLL: What Is Your Favorite Movie Musical?