Plot: The early adventures of young Harvard symbologist Robert Langdon, who must solve a series of deadly puzzles to save his kidnapped mentor and thwart a chilling global conspiracy.

Review: Dan Brown’s series of thrillers featuring Robert Langdon have been massive bestsellers going back to Angels & Demons, but it was The Da Vinci Code that became a cultural phenomenon. When Ron Howard and Tom Hanks partnered on a big-screen version of that book, it went on to gross $760 million worldwide despite being universally panned by critics. After two sequels, the franchise makes its way to the small screen with a prequel based on the third novel in the series. Repurposed as a prequel chronicling one of Robert Langdon’s earliest adventures, The Lost Symbol blends the puzzles and clues inherent to Brown’s novels while spinning a mystery that connects directly to the earliest days of American history.

Taking over the Langdon role from Tom Hanks, Ashley Zukerman (Fear Street Trilogy) plays the Harvard professor as he searches for his missing mentor, Peter Solomon (Eddie Izzard). Changing Solomon from a close friend to a father figure is one of many minor tweaks to the story which, overall, remains very close to the novel. Langdon’s love interest this time around is noetic scientist Katherine Solomon, now Peter’s daughter rather than his sister. We also have Sumalee Montano as CIA Director Sato as well as all-new character Nunez (Arrow‘s Rick Gonzalez), a former soldier turned police officer who gets involved with Langdon’s adventure. We also have Beau Knapp as the tattoo-covered villain Mal’akh who shares many similarities with Paul Bettany’s Silas in The Da Vinci Code.

Over the three episodes made available for this review, The Lost Symbol follows a very conventional structure in keeping with the series original home on NBC. Like many Peacock offerings, this show doesn’t do much to venture away from the formula of network shows and even keeps the episodic running time around 42-44 minutes with pauses for commercial breaks. The only thing that elevates this away from feeling like an NBC series is the casual profanity. Produced by Brian Grazer and Ron Howard with the pilot episode directed by 10 Cloverfield Lane helmer Dan Trachtenberg, The Lost Symbol does offer some interesting puzzles to solve but more often than not gets mired in feeling like a typical mystery or procedural show.

I have read all of the books in Dan Brown’s series, mostly ignoring some of the weaker elements of his writing, because I love a good puzzle quest. I had hoped the movie version of The Da Vinci Code would have taken more of a cue from National Treasure rather than the dark and serious approach that Howard and Hanks gave the films. The Lost Symbol does have the time and scope to adapt all of the various subplots, twists, and turns from the source material but that also means some of the more fanciful and bizarre elements come with it. There is a fair amount of suspension of disbelief needed to follow these tales, but The Lost Symbol ventures into meditation, dreamscapes, and other deus ex machina moments that may have audiences rolling their eyes.

Through the first three episodes, there are a lot of characters introduced whom we are meant to be invested in who end up spouting a lot of exposition to keep the complex narrative chugging along. That means this is not a show you can put on in the background while doing something else. There are a lot of visual and auditory clues dropped that require your full attention to grasp the history surrounding Freemasonry and the mythical portal that forms the central goal of this story. Spread over ten episodes, it remains to be seen if this series will spawn subsequent seasons adapting the other Robert Langdon novels or possibly going in an original direction, but the potential is here for this to turn into something a lot more than what we have seen so far.

While Tom Hanks never felt quite right for the Robert Langdon role, the scope of Ron Howard’s films was appropriate to the outlandish mystery at the core of each movie. The Lost Symbol does a far better job at bringing the intricate puzzle-solving and conspiracy elements to screen but still fails to capture the Indiana Jones-esque tone that Dan Brown’s novels manage to evoke. All of the building blocks are here but there is just something missing. Fans of the books may find this adaptation to be a far more satisfying take on the source material but it still fails to be a rollicking adventure. 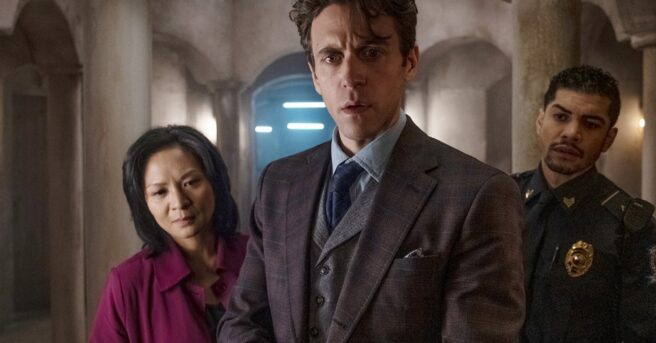 Gunther actor has passed away after cancer battle

Halloween: The Curse of Michael Myers (1995)

Dune exceeds expectations with its number one finish

Beware, There May Be Food Shortages This Fall