PLOT: Denis Villeneuve’s highly anticipated adaptation of Frank Herbert’s classic 1965 novel, Dune tells the tale of Paul Atreides, a young nobleman who some begin to believe is a God when he is sent with his family to protect and procure a powerful element called melange, or “the spice.” It is so powerful, that there are others who would willingly do harm to anyone that stands in their way of taking control of the precious substance.

REVIEW: It’s not been an easy road for a successful cinematic translation of Dune, the classic 1965 novel by Frank Herbert. In 1974, Spanish filmmaker Alejandro Jodorowsky had planned to film this epic adventure. Yet without funding and other issues, his take never saw the light of day. And then there was David Lynch’s 1984 misfire of an attempt to bring this cerebral sci-fi feature to life. Which was mostly unmemorable aside from Sting’s bizarro wardrobe. And finally, after several decades, the critically acclaimed Denis Villeneuve (Blade Runner 2049, Arrival, Sicario) has given this hard-to-film novel the moviegoing experience fans were waiting to see. Bold, profound, and breathtakingly gorgeous, the first part in a planned two-part feature honors the source material in the most satisfying way possible. Dune 2021 is a modern-day work of art.

Paul Atreides (Timothee Chalamet) is the son of a Nobel family, who is in line to take over after his father, Duke Leto Atreides (Oscar Issac). After his powerful father accepts the stewardship of the dangerous and desolate planet Arrakis, they make the journey to help secure their family’s place. The planet, also known as Dune, is the only location where you can find melange, or “the spice,” a life-altering drug that has many others are desperate for its power. There is much more that is unknown and unexpected for Paul. Even before his adventure, he continually dreams of a strange girl named Chani (Zendaya), a member of the Fremen tribe living in the deep desert. Once he and his family arrive on the deadly planet, a series of unfortunate events leads them to an evil and powerful man named Baron Vladimir Harkonnen (Stellan Skarsgard) with a few other dangerous characters.

Villeneuve is a masterful storyteller. With a script co-written by Jon Spaihts, Eric Roth, and Denis himself, this first chapter explores a very complex and detailed story with clarity and style. More importantly, it does so without sacrificing the impressive detail of Frank Herbert’s original vision. Much like the haunting Blade Runner 2049, the director has taken the time to explore numerous characters without sacrificing the main story and themes. Without the overuse of narration (something which Lynch’s film suffered deeply from), this new adaptation takes the time to build this insanely beautiful world without sacrificing the soul for a typical blockbuster. And much like the semi-recent classic, Peter Jackson’s The Fellowship of the Rings in the LOTR trilogy, this is only the beginning of the story.

As impressive as the script is, you cannot deny the sheer beauty on display. Along with cinematographer Greig Fraser, Denis Villeneuve crafts a stunning world, with nearly every frame creating a striking image. There’s not a moment in this where the special effects stand out as fake or uninspired. Whether it’s the magnificence of gigantic Starships, the sprawling sand-covered dunes, or the Ornithopters (a sort of bug-like helicopter), it’s all a feast for the eyes. The visuals are mind-blowing. It’s not shocking that the man behind both Blade Runner 2049 and Arrival could pull this off. Yet how effortlessly this world feels so shockingly real is another reminder of why Villeneuve has such a gift for this kind of exploration. One of the best examples of this is the effectively creepy Sandworms. What could have easily been a silly creature becomes a frighteningly real danger for Paul and his allies.

Timothee Chalamet once again gives another exceptional performance. The young actor continues to bring impressive vulnerability to his work, and this is especially true with Paul. He also has great chemistry with a few of his co-stars, especially Jason Momoa and Josh Brolin (Duncan Idaho and Gurney Halleck), who both play trusted aides to Leto. Yet it’s the undeniably deep relation he shares with his birth mother, Leto’s concubine Lady Jessica (Rebecca Ferguson). The three help Paul prepare for an uncertain future. One sequence, in particular, finds the two must seek shelter after a daring escape. It is so sublimely moving that it only makes you care more for the mother and her son and understand their place in this fantastical tale. You’ll also find impressive work from Dave Bautista, Javier Bardem, Charlotte Rampling, Stellan Skarsgard, and much more.

Without overshadowing a good story and spectacular imagery, the score by Hans Zimmer is yet another perfect element. The music is perhaps just as impressive as the visuals. All of this creates such a brilliant and visually complex work. It is one that perfectly manages to mix all elements into one. Even though it may be a slow burn, the action set pieces do not disappoint, neither does the filmmaker sacrifice the subtle themes and ideas explored throughout. After decades of not quite being able to bring this legendary story to the big screen, the filmmaker has gifted fans of the book – as well as those who haven’t read it – a truly spectacular piece.

Dune is science fiction at its best. Denis Villeneuve has created one of the best fantasy features since Peter Jackson’s journey into Middle Earth. The performances are inspired, with Chalamet, Ferguson, Bautista, Skarsgard, Isaac, and especially Jason Momoa all as standouts. The marriage between a fantastic script and visually sumptuous imagery help give this first of two-part feature a richness that you rarely see in a major summer release. When the effects are this detailed and stunning, it’s easy to lose sight of everything else. However, Dune is a modern masterclass in filmmaking. While I’d easily recommend giving this a rewatch on HBO Max, I’d highly recommend for the first viewing that you seek this out in IMAX, as you’re unlikely to see anything this jaw-droppingly stunning and brilliantly creative in theatres again anytime soon. 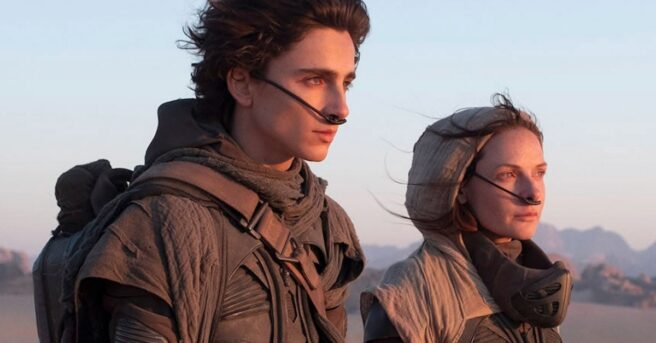 The Big Red Dog gets Paramount+ release this December