PLOT: A decorated marine (Riz Ahmed) kidnaps his two young sons, claiming that they’re in the midst of an alien invasion and that only he can keep them safe.

REVIEW: At this point, I don’t think anyone can deny that Riz Ahmed is one of the best actors in the business. To me, his performance in Sound of Metal ranks as one of the finest of the last decade or so, and the fact that he didn’t win an Oscar for it boggles the mind. Amazon Studios seemingly had a lot of success with that one, so they’re behind his latest, Encounter, which is more mainstream-friendly and mashes up a couple of different genres.

In it, he plays a tough guy marine who’s estranged from his two kids after a few years away from home. He’s divorced from their mother (Janina Gavankar), and his oldest son (Lucian-River Chauhan) yearns for his dad’s return – openly defying his mom’s kindly new boyfriend. Finally, he gets his wish when his dad spirits them away in the night, taking them on a cross-country flight through America’s heartland. Unfortunately, he’s got a tall tale for them, with him telling them that insect parasites have made their way to earth and are taking people over. He seems nuts – but is he?

While the movie reveals pretty early on whether Ahmed’s character is telling the truth or not, ultimately, that revelation takes a backseat to the real meat of the story -Ahmed’s relationship with his oldest son. Chauhan is terrific as the rebellious older kid who wants to believe his dad but is wary. He’s happy just to spend time with this idealized figure, even if he comes to realize quickly his dad may be dangerous. In the film, they’re pursued by the F.B.I, led by Rory Cochrane’s sympathetic agent, who believes he may be looking at a potential “family annihilator.” Octavia Spencer is a pragmatic character linked to Ahmed, who’s the only one who thinks he won’t hurt his family.

It adds up to a strong star vehicle for Ahmed, who has to maintain your sympathy while also making you wonder whether he’s a danger to his family or not. One thing’s for sure; Encounter feels a bit like a dry run for Ahmed to take on a couple of action roles, with him in military man shape for the part. The movie has a handful of really decent action sequences, directed with style by Michael Pearce. It’s the only film I know that has a shootout scored to “Against All Odds (Take a Look at Me Now)” by Phil Collins. Music, in general, is exceptionally well-used in this movie, with it having a tremendous score by Jed Kurzel. There’s a kickass sequence towards the end where Ahmed takes on two survivalists in a major gun battle that convinces you Ahmed may indeed have action hero chops.

In the end, Encounter is a film that will likely alienate a particular segment of the audience once the big revelation is out of the way (not helped by the fact that Amazon is marketing it as something it’s not). However, if people have the patience to stick with it and embrace it as another type of movie, it adds up to a pretty solid little streaming exclusive for Amazon and a nice against-type part for the great Ahmed. Check it out! 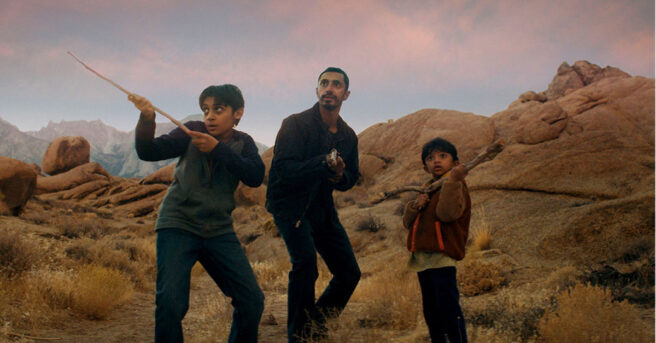