PLOT: A contract killer (Mary Elizabeth Winstead) is poisoned on the eve of her final assignment. Before succumbing to radiation sickness due to her poisoning, she opts to use her last twenty-four hours to find and kill those responsible, cutting a bloody swath through the Tokyo Underworld.

REVIEW: Netflix’s Kate is nothing if not familiar. The “twenty-four hours to live” scenario has been done to death, going back to the 1949 film noir classic D.O.A. Heck; the premise has already been reinvented for the 21st century with Crank, with the only real difference in Kate being that the protagonist is now female.

Arguably, Kate is only really worth watching for the action design and that Mary Elizabeth Winstead plays the lead. Kate would be eminently forgettable with a less committed lead performance and action that wasn’t executed as well. Coming from David Leitch, Chad Stahelski and Kelly McCormick’s 87North Productions, you can rest assured that the action looks pretty good here, with Winstead looking like she’s doing a lot of her stunts.

Indeed, one of the things that make 87North’s movies so remarkable is that they often turn unlikely performers into action heroes, with them recently reinventing Bob Odenkirk in Nobody. Winstead, who’s only in her mid-thirties, seems more than up to the challenge, plunging herself into the action. She moves well and looks good handling all the weaponry, but it’s the hard-to-hand/ edged weapons fights that work well, such as an extended blow-out in a Japanese Yakuza bathhouse. There’s also a killer battle royale with Japanese pop star Miyavi, which alone makes this well worth watching.

Still, it’s too bad that Winstead, who has an intense vibe that makes her a convincing badass, is saddled with such a lame hitwoman storyline. How many times have we seen an assassin movie where they’re haunted by a job gone wrong that involved a kid? Here, the titular Kate ends up protecting the daughter of the Yakuza boss she killed previously from upstarts, saving the girl from having a future like hers.

Even Kate‘s origin that she was recruited as a child by Woody Harrelson seems painfully familiar to Black Widow. Even worse, there’s an origin scene where Harrelson sends her to kill someone with an empty gun that seems copied from La Femme Nikita. As if any hardcore action fans are watching this that isn’t at least passingly familiar with Luc Besson’s film, which is still arguably the best hitwoman movie of all time.

It’s doubly odd that they would green-light such standard fare when they’ve put a lot of money and creativity into it. Director Cedric Nicolas-Troyan makes the most out of his Japanese locations, and the Nathan Barr score works in many Japanese pop tunes that give the film some authentic atmosphere. They even managed to entice some legit Japanese heavyweight actors into the cast, including Jun Kunimura (from The Wailing) and Tadanobu Asano, but only Kunimura gets a substantial part. Michael Huisman from Game of Thrones is wasted in a throwaway role, whereas Harrelson never really gets in on the action with Winstead. It’s her show all the way.

All of this makes Kate a mixed bag for Netflix. On the one hand, you have some cool action beats and a terrific performance by Winstead. On the other, you have a familiar plot and a recycled script without much originality. In the end, it’s passable but with a better premise; this could have been another major winner from 87North, but it’s no Nobody and not the next John Wick (or Atomic Blonde, for that matter). 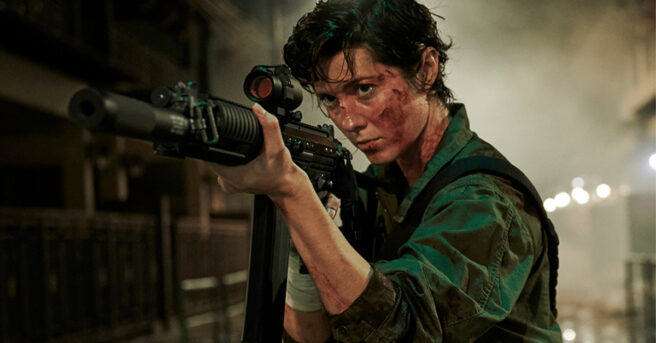