PLOT: After a tragedy occurs for a mother-to-be, she begins to have strange and unsettling visions. As the horrific images draw her further in, she discovers that she’s connected to a nightmarish creature, one that is committing a series of brutal murders.

LOWDOWN: There are very few names in modern horror that have been as impactful as James Wan. The filmmaker terrified us with Saw. Then he spooked us with Insidious. And if that wasn’t enough, he created the cinematic world of paranormal frights with The Conjuring. Let us not forget that he’s also stepped outside the genre with blockbusters like Furious 7 and Aquaman. Thankfully, his break from scares is over with the new feature Malignant. Starring Annabelle Wallis, Maddie Hasson, George Young, Michole Briana White, and Jake Abel, Wan’s latest takes a slightly different direction by offering an imaginative blend of horror and fantasy, filled with tension and surprises.

Annabelle Wallis stars as Madison Mitchell, a woman dealing with a few problematic family issues. After trying desperately to have a child with her husband Derek (Abel), she finally is about to have a baby. Unfortunately for her, Derek isn’t the most understanding spouse, and he has a bit of a cruel streak. When she arrives home after work, he viciously pushes her against a wall. It all leads to a tragic event, leaving Madison alone. After this, things only get worse as she begins to see horrific visions where a mysterious creature is killing off those around her. As the waking dreams get more vivid and frightening, Madison’s sister Sydney Lake (Maddie Hasson) and a couple of detectives get pulled into the nightmarish world closing in around her.

Based on a story by Ingrid Bisu and James Wan, with a script by Akela Cooper, Malignant is a return to the filmmaker’s early career. It’s rare to sit through a genre flick and not quite know what direction it’s going. And that is not a complaint. As Wan builds to the ultimate reveal of what’s happening in this insane feature, the tension rarely lets up. There is an energy here, something that Wan ramps up whenever things get truly insane. And yes, this wild and wicked tale is an engaging mix of Giallo, Cronenberg body horror, with an impressive amount of bone-crunching violence. As twisted as this thriller is, I’d highly recommend that you avoid spoilers as much as possible. Remember that moment we realized John Kramer was the blood-splattered body in the bathroom in Saw? There may be a reveal here that is very close to that.

Annabelle Wallis is perfect as Madison. The actress is equal parts vulnerability and ferociousness when necessary. It’s a very challenging role, one that in the wrong hands may not have worked. She maneuvers through this emotionally traumatized performance with the perfect balance of, is she or isn’t she insane. It’s a turn that could’ve come off as cartoonish. Thankfully, it’s easy to sympathize with her. In addition, both George Young and Michole Briana White are terrific playing investigators who question the outrageous stories that Madison is claiming. However, it is Maddie Hasson who shares the most important relationship with Madison. And then there is the talented Jake Abel. Playing against type, Abel’s Derek is a monster of a man, and the actor is quite good at being an abusive jerk.

For both The Conjuring and Insidious, Wan took a less is more approach to horror that was a bit more character-driven – but still stylish as hell. As opposed to it being heavy on extreme violence. But the bloodshed is back. One sequence that takes place in a crowded jail cell is bonkers insane in the best of ways. Brutal and gutwrenching, this is a take no prisoners type of genre moment. Even from the very first scene, you can tell that the body count will be high, and the amount of on-screen terror is far bloodier than what you might expect from the director, considering his recent work. Yet even still, the gore and cracking bones work in favor of the film’s villain. And what an intriguing villain Gabriel is. To say too much about him is a disservice to those who haven’t witnessed him as of yet.

At times, the film’s intriguing take between the fantastical and the more grounded doesn’t quite translate. It’s a complicated walk between the overtly bizarre and creating tension. That said, there is one reveal that almost goes overboard in its outlandishness, yet it still works. Malignant is an impressive return to the horror genre for James Wan. It also reminds us what the filmmaker can do with a smaller budget as this film is just as stylish as the far more costly Conjuring films. If you’ve been missing Wan’s earlier inspirations, you’re in for a pleasant and early Halloween treat with the original and beastly creature by the name of Gabriel.

GORE: Malignant is perhaps the goriest feature from James Wan yet. And yes, that means the original Saw. We’ve got a wildly gruesome jailhouse massacre, broken bones protruding out of various victims, severed limbs, and a few other tasty horror treats. While it may not be on par with the Saw sequels gore-wise, this one will satisfy those looking for a satisfying R-rated horror flick.

BOTTOM LINE: James Wan has done it again. Malignant is an outlandishly entertaining mix of Giallo, body horror, and brutal slayings. Annabelle Wallis is fantastic as a woman facing real-life horrors, as well as something far more sinister and fantastical. It’s a gruesome and tense flick that is yet another reminder of just how good Wan is at creating a satisfying and engaging genre experience. The score is impressive, as are the gore-soaked set pieces scattered throughout this wildly creepy feature. Yeah, it’s a little weird, and it may take a bit to grasp the insane nature of this modern horror tale, but it’s damn well a ride worth taking.

Malignant is ready to frighten you this Friday, September 10th, 2021. 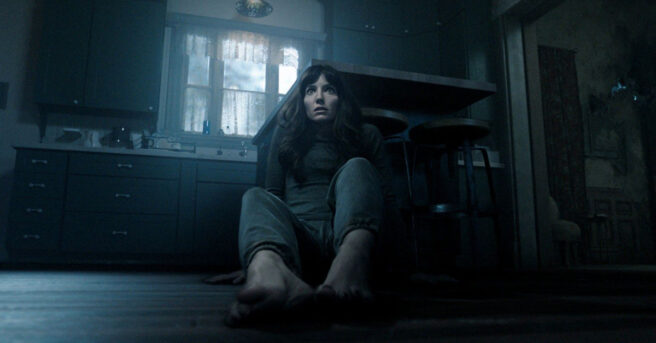