PLOT: A criminal is tasked with finding and returning a woman who escaped her cruel “grandfather.” To make matters worse, he has three days to do so, or his bomb-fused jumper explodes. Oh, and there’s ghosts, samurai, and American cowboys added as well. Things get really weird here.

LOWDOWN: I’m old enough to categorize Nicolas Cage as an Oscar winner who always branched off into a bit of delicious schlock. I bring this up because Mr. Cage has become a living meme to a younger generation. Though that has probably given him a more robust and lasting career, It also brings with it the “staggering depth of inadequacy” he’s saddled with for projects that range from odd to terrible. Except that Cage is and will always be the f*cking man. Know your history. This brings me to his newest outing and the movie at hand, Prisoners of the Ghostland (WATCH IT HERE). I’ll get it out of the way early and let you know that this is one of his best projects in years. Yep, I said it.

I say that knowing that half of the people reading this will eventually curse me because this movie will be highly divisive, no doubt. It would be a lie to say I entirely get what’s going on in it, but it doesn’t matter much with a movie like this. Prisoners of the Ghostland goes full Timothy Leary with style over substance approach. But if a low-budget post-apocalyptic western-influenced samurai flick starring Cage as a Clint Eastwood stand-in sounds like a good time, then this may be the flick for you. I’ll try to keep the general plot details light so you can have a similar experience of general confusion as I did.

Cage, credited as Hero, botched a bank robbery with his partner Psycho (Nick Cassavetes), and in doing so, cost the lives of everyone in the bank. While Psycho got shipped off to another prison, Cage is being held privately in Samurai Town, where the robbery took place. Flashy and styled after feudal Japan, it’s run by an American dictator of sorts called The Governor (Bill Moseley). The Governor has lost his adopted and captive granddaughter Bernice and uses Cage, Escape From New York style, to bring her back before the detonators in his clothing explode. Sofia Boutella is stunning as the mostly silent Bernice (Sofia Boutella) who has found refuge with the wasteland tribe on the outskirts of society. It’s up to Bernice and her new friends to convince Cage that they must band together, escape the haunted wasteland, and take down the evil Governor once and for all. It’s as ridiculous as it sounds, and director Sion Sono never once tries to ground this in any tangible reality. In fact, the movie’s biggest strength is its over-the-top theatrical approach which is something Sono embodies with ease.

Many will hate this. There’s no way around it, but I can appreciate any strange story that aims to break the mold. Prisoners of the Ghostland is a low-budget tale with grand ideas told through a psychedelic lens, and even when things don’t work narratively, the dream-like visuals find a way to bridge the gap and keep you from total confusion. What works better than his similarly weird and arty Mandy (which I enjoyed) is the fast, driving pace. I can dig a slow burn, but I respond more to things with a pep in their step, and no time is wasted here. Prisoners of the Ghostland is a mushroom trip that is equal parts spaghetti western and chanbara filtered through Madmax, Van Damme’s Cyborg, and Big Trouble In Little China. In the end, it’s a beautiful mess that swings big with trippy visuals and thematic ideas told in such a bizarre way that I’d argue is incomprehensible at times, yet I became entranced by the beauty and sheer balls of what was on screen. Was this overacted? Absolutely. Does it favor style over the story? You betcha, but the experience was a wild ride that was both gorgeous and fascinating. Thankfully Sono didn’t take the standard snail’s pace approach and kept the trip moving.

Prisoners of the Ghostland frames a convoluted story with such beauty and bombastic theatrics that I went right along for every goofy twist and turn. Bill Moseley chews scenery like it’s an overcooked steak and steals the show away from Nicolas Cage on more than one occasion. Surprisingly, Cage plays it pretty low-key for the most part and leans into his quiet and stoic side. Though he does give an outstanding and passionate line reading of “If you told me three days ago I’d be standing here with one arm and one testicaaaaaaaaal…” which ends up being one of the great contemporary vocal cadences in modern film. The speech is fantastic in itself, by the way. It’s Cages Glengarry Glen Ross moment, and he owns it marvelously.

Now things get weird for the sake of being weird, and a few story ideas seem like significant challenges yet are either fixed without issue or are dropped entirely. The plot about the ghostland is a great idea that doesn’t go anywhere and becomes no more than a road bump in the overall plot. Because of the satirical tone, we get a few occasions presented as severe to the characters then descend into parody, which got a bit on my nerves. I liked where I thought they were going and found myself disappointed that a few cool scenes amounted to nothing but a joke in the end. You have to suspend logic here because if you’re not vibing with the tone and style, you’ll find the flimsy story too much to forgive

GORE: We get an exploded testicle, some beheadings, and a few good blood sprays. Not super gory, but it doesn’t hold back either.

BOTTOM LINE: Prisoners of the Ghostland is a stunning and bizarre trip with a top-notch Nicolas Cage as your captain. Purposefully campy with embellished dialogue and extras that damn near dance out their reactions, this movie won’t be for the masses but is one hell of an experience for those who can get on the same wavelength. I’d recommend Prisoners of the Ghostland to anyone who abides by the wise teachings of the great Hunter S. Thompson. “Buy the ticket, take the ride…and if it occasionally gets a little heavier than what you had in mind, well…maybe chalk it up to forced consciousness expansion.” Now, I ask you, dear reader. Is there nothing better than mutually satisfying weirdness? I think not. 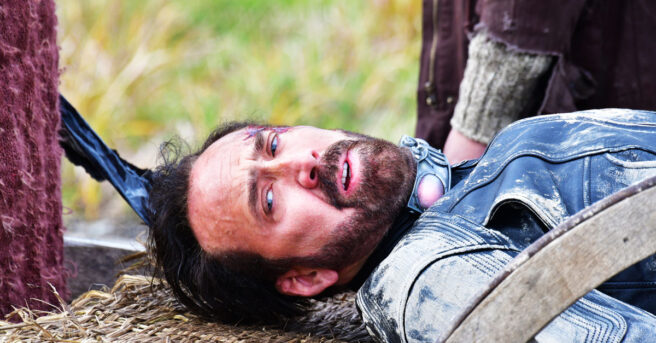