Plot: Baba Voss struggles to reunite his family. His estranged brother Edo has captured Baba’s daughter Haniwa, vowing to exact his revenge against his brother. Meanwhile, the threat of war looms between the Kingdom of Paya and the Trivantian Republic, drawing Baba and his family directly into the center of the conflict.

Review: As one of the series that launched AppleTV+ back in 2019, See carried with it the name recognition of Aquaman star Jason Momoa as well as a massive budget worthy of a Hollywood blockbuster. From the mind of writer Steven Knight and director Francis Lawrence, the first season presented a uniform vision that felt like a multi-part film. It did not live up to its potential, in my opinion, but the continuation of the story into a second (and already announced upcoming third) season means that the chronicle of a post-apocalyptic world pitting the blind against those with sight could continue to develop. The new season of See certainly does continue the story by adding new locales and characters to an already large cast. The result is consistent with the first season as the scope of the story increases while still maintaining a focus on character development.

Picking up after the capture of Haniwa (Nesta Cooper) at the end of the first season, the first three episodes of this new season find Baba Voss (Jason Momoa) hunting down those responsible for kidnapping his daughter. Within the first minutes of the premiere episode, we see Baba’s fighting skills put to violent use as he takes down a group of soldiers alongside his son Kofun (Archie Madekwe). As he ventures into the stronghold of his enemy, it becomes quickly evident that this season will spend a lot more time analyzing the mysterious past of Baba Voss and how it connects to the reappearance of his brother, Edo (Dave Bautista).

Seeing Momoa and Bautista share the screen in this series (their second pairing after the upcoming Dune), it should come as no surprise that the pair are actively discussing projects they can do together. Edo and Baba have a complex history that hinges on multiple reveals through this season. While we got to know Baba last season, Edo gets a solid amount of time on screen here and Bautista does some impressive acting work. While there are action-heavy moments this season, Bautista shines in the quieter and more introspective scenes that truly allow us to learn about Edo and his deep animosity towards his brother.

The story also devotes time to the dynamic between Queen Sibeth (Sylvia Hoeks) and her sister, Maghra (Hera Hilmar) as they venture into the realm of Lord Harlan (Tom Mison), a Littlefinger-esque bureaucrat who seems like a solid foil for the Queen. We also meet Edo’s second in command, Wren (Eden Epstein) who forges a unique bond with Haniwa. The multiple focuses in these early episodes keep the momentum moving and force you to really pay attention to who holds which cards in this massive game of thrones.

While Francis Lawrence and Steven Knight remain aboard as producers, writers Jonathan Tropper, Stephen Tolkin, and Shelley Meals and directors Simon Cellan Jones, Frederick E.O. Toye, and Anders Engstrom are credited on the three episodes made available for this review. Tropper was a part of the writing staff on the first season and co-wrote the first season finale, so there is consistency behind the scenes in the approach to these stories, but it does feel as if this is more expansive than the first season’s general focus. Big genre series tend to go in this direction, but I found myself wishing this season had followed the same path as the first. Overall, the formula is intact and thanks to Bear McCreary’s excellent score, most people likely won’t even notice the shift behind the camera.

See does not do much different this season as compared to the first, but that is not necessarily a detriment. Still a very watchable action series with some pretty impressive fight sequences, See benefits from the addition of Dave Bautista. What is very evident in watching these first three episodes is the added focus on the world-building elements as this story marches towards an all-out war between the developing factions. Personally, this series feels very familiar already with series ranging from Into The Badlands to The Walking Dead handling this material before. If you were all in on the first season, you will still love these new episodes. For anyone ambivalent, these chapters aren’t going to change your mind.

See premieres its second season on August 27th on AppleTV+. 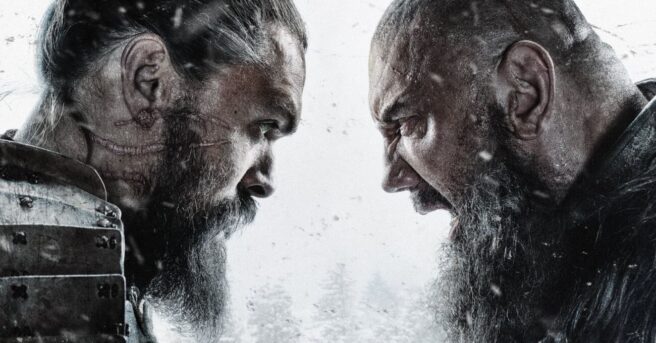