PLOT: After using and abusing the earth, the wealthy and wise have left to live in space. But after multiple generations, they are now unable to reproduce and send a recon mission to their old planet to see if living conditions have improved enough to move back.

LOWDOWN: I’m a sucker for this type of exploration into bleak and depressing science fiction, and The Colony (WATCH IT HERE) Is a surprising little gem that quenched my cynical and pessimistic thirst. Set many years in the future, two astronauts, Blake (Nora Arnezeder) and Tucker (Sope Dirisu) survive a crash landing on old earth. Sent on a mission to study fertility, old earth is populated by roaming groups of survivors left generations ago to adapt or die. The wealthy colonized a new home, and those left behind broke off into factions of small settlements of people just trying to live out life in apocalyptic conditions.

The trailers make this look far more epic and wide-reaching than it ultimately ends up being, and that may be why I was pleasantly surprised by what I got instead. I’m sort of bored with generic sci-fi shoot ’em ups and was glad this took everything down a notch. The Colony is a slow burn world-building tale with a poignant message that somehow does the impossible and doesn’t shove it down the audience’s throat. It’s there but not necessarily the driving force. The Colony puts most of its effort into the atmosphere and building the overbearing feeling of despair. Expect some mild spoilers before we dig in, as general plot beats will need to be covered, but I won’t ruin anything important or surprising. So, like I always recommend, pour yourself something nice, and let’s journey back home as we tackle Tim Fehlbaum’s The Colony.

The opening scene starts with a good smack across the face as we witness Blake and her teammates try and survive a botched re-entry into the dark deep ocean of old earth. It’s intense, stressful, and keeps you on edge the entire time. Though the action scenes are few and far between, this opening gives you the perfect scope and tone the precedes the rest of the movie. Ending with a wide, top-down shot of this massive ocean illuminated by fire centered by a floating space capsule is a poetic frame. It leads into what The Colony does best, paint you a beautifully depressing picture. The world we left behind is ugly, grey, and made up entirely of bleak mudflats surrounded by an endless fog. It is a haunting visual that will turn many off, but I fell in love with how creepy and suffocating it all felt. Working on a smaller budget, The Colony can do a lot with this clever fix on keeping things minimal without sacrificing the story’s integrity and avoiding the feeling of being cheap.

Cinematographer Markus Förderer gets major props for doing so much with very little. The fog is the primary visual cue as this desolate planet seems to be stuck in Silent Hill mode (thank you), and having these rusted and abandoned cargo ships populate the world, peaking through the fog far out in the distance, is a sight to see. With such a limited sightline, Förderer and Fehlbaum work together perfectly to give you the sense of vastness while showing none of it. Earth’s original inhabitants who survived have become nomad tribes that make small camps outside their rickety boats. There are some strong Waterworld vibes in terms of style and look here, which worked perfectly. Any reference to the great and underrated Waterworld is much appreciated and encouraged by me. Something that sticks out as an interesting effect of a dying planet is that when the mythical tide comes in, which you never see, only hear, it floods the land and becomes a world of oceans.

The first act is Blake’s survival, exploration, and a run-in with the locals. At the same time, the rest of the film changes pace to a thriller about her original mission and the father that came on a previous assignment that never returned. Nora Arnezeder plays Blake with a rugged closed-off performance that doesn’t always compliment The Colony. Maybe because she’s an astronaut instead of a marine, It came off weird at times, but she won me over with more of an emotional arc by the end. On a story level, this doesn’t do anything you haven’t seen before and becomes kind of genetic in its third act. This brings me to what doesn’t work here and why it stumbles a bit in the end.

The Colony isn’t robust in the story department, with the overall message and arc being more set dressing than anything with balls. We get two factions, the survivors and the wealthy, who have come back with re-population in mind fighting over freedom and the liberty of life. Again, I’m ok with this being background noise as I’d be more impressed with a character study and unique world than another history lesson. Other sci-fi movies have done this message or a similar story far better, so I’m not against this keeping it at surface level, but even my forgiving ass can admit when the story is thinner than my last paycheck. The Colony focuses more on world-building as our mostly silent protagonist learns about a place she’s only ever heard of. Arnezeder plays the right amount of stoic and vulnerable that eventually won me over. At the same time, Förderer and Fehlbaum give me a miserably gorgeous movie that I’d love to see explored on HBO because there’s too much to explore with the time given and things end up rushed because of it.

GORE: Very little blood here. This isn’t a movie focused on violence but that of perseverance and survival.

BOTTOM LINE: I ended up enjoying The Colony. The trailers try and sell this as an epic action sci-fi movie which it is not, but I liked the slower pace and felt it was more appropriate for the tale being told. This haunted house of a world is interesting enough that I enjoyed just exploring it with Blake and the other folks populating this land that’s Fallout meets Waterworld. Does the story work? Eh, not always, and The Colony tries to be more in-depth than it can actually handle, but when it stops to let you take things in, I found myself fully invested, beer in hand. The Colony is flawed in its execution but works best when the world is driving the story. Visually stunning and delicately paced, I had more fun with this than I thought I would, and if you go in with the expectations I’ve set, you may dig it yourself. 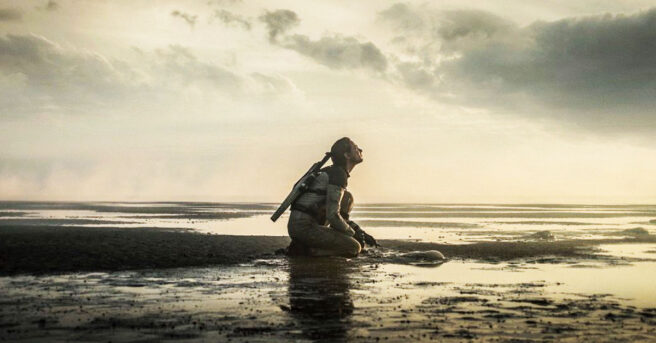 Christopher Nolan reportedly has big demands for his next film

MOVIE POLL: What Is Your Favorite Clint Eastwood-Directed Movie?

Kevin Smith Films Ranked According To Fans On IMDB