PLOT: The true story of Tammy Faye Bakker (Jessica Chastain). For much of the seventies and eighties, Tammy and her husband Jim (Andrew Garfield) were the most famous televangelists on the planet. But, years of financial and sexual impropriety on Jim’s behalf threaten to bring down the empire and leave Tammy Faye a laughing stock.

REVIEW: The Eyes of Tammy Faye is a fun look behind the scenes of one of the biggest American religious scandals of the eighties. As a kid, I remember this story being everywhere and my parents mocking the frightfully made-up Tammy Faye, who cried and cried and cried, while her husband seemed like the biggest crook to ever preach from a pulpit. They were not people that evoked a lot of sympathy, but perhaps attitudes have softened, with this a remarkably empathetic look at both of them. However, Tammy Faye (naturally and deservedly) receives the most sympathy.

However, it’s also a 120-minute caricature, and never for a second did I feel like the Bakker’s real lives were being depicted. The Tammy Faye we see portrayed by Jessica Chastain is the same I remember watching on Entertainment Tonight. Then again, maybe that’s what she was, with the intro slyly acknowledging the fact then Tammy Faye tells a makeup artist that some of her makeup is tattooed on, and this is – for better or worse – the real her.

At any rate, The Eyes of Tammy Faye is entertaining. Chastain is having a ball as Tammy Faye. While she doesn’t get let entirely off the hook here, Chastain and director Michael Showalter finds things about her to admire, such as her refusal to tow the evangelical Christian line and condemn gay people. She even has on a gay pastor to share his experience with AIDS (something that actually happened) and seems incapable of hate. However, she’s also shown as incapable of questioning where the piles of money she spends on her furs and clothes come from and seem perfectly happy riding the gravy train. Instead, she falls for her husband’s line, that God wants you to be rich, hook, line and sinker.

Andrew Garfield, as Jim Bakker, is saddled with the more loathsome character of the two, but even him Showalter views him more as a comedic figure than someone doing harm. His impropriety within the church as somewhat waved off as to be expected with all the money coming in. Here, his biggest sin is his cruel reaction to a minor, fleeting affair Tammy Faye has with a Nashville music producer. Who could blame her?. Garfield plays him as a complete closest case, refusing to touch his wife and rolling around on the floor, wrestling with his (male) number two with glee. Yet, when he eventually comes clean on his misdeeds, he’s not depicted without sympathy, even if he’s still at it, working as a televangelist well into his eighties.

The film depicts Jerry Falwell as the worst of them, with him the snake in the grass the Bakker’s couldn’t trust. Vincent D’Onofrio portrays him as utterly humorous and with a cruel streak, while 700 Club host Pat Robertson doesn’t come off any better. Yet, the film tries to stay somewhat apolitical, with only a few conversations about the rise of the religious right, sticking instead to the Bakkers’ rise and fall.

It adds up to a fun film that probably goes about as deep as it needs to. The movie is light and fluffy, just like Tammy Faye herself. But was there more to Tammy Faye Bakker than met the eye? Perhaps. I can’t say I left the film with a whole lot of sympathy or admiration for her, but I guess you could say that in her defence, she was never as bad a person as she could have been, which is something. However, she doesn’t come off as an especially inspiring figure, so if the film’s intention was to really redeem her in society’s eyes, they didn’t really do it. 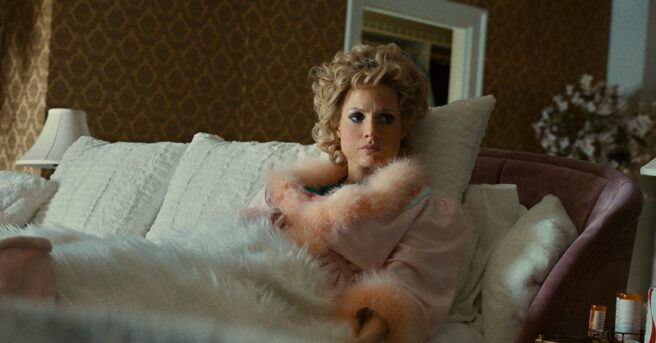 Shazam! Fury of the Gods director offers a post-production update on the film

Rihanna on Why She’s Scared of Her Billionaire Title