PLOT: When a young woman named Mary falls in love with her family’s maid, Mary’s strict religious family punishes both of them severely – so the women start plotting to carry out a deadly plan of revenge.

REVIEW: The feature debut of writer/director Edoardo Vitaletti, The Last Thing Mary Saw is not a movie to turn to if you’re looking for something that will provide straightforward answers. Nor is it a movie to put on if you’re looking for something exciting and eventful. This is very much a slow burn, and over the course of its 89 minutes (which feel substantially longer than 89 minutes) it weaves its own strange mythology without fully explaining itself. A lot of viewers will probably find sitting through this movie to be a rather frustrating experience, but Vitaletti has assembled a solid cast for the film, the sort of cast some may stick around to watch even if they’re not enjoying the movie the actors are in.

In the lead roles are Stefanie Scott (Insidious: Chapter 3) as Mary, a young woman who’s part of an extremely strict religious family, and the Orphan herself Isabelle Fuhrman as Eleanor, the maid that Mary embarks on a romantic relationship with. Unfortunately for these women, they’re living in the year 1843 and their relationship is seen as being shockingly sinful, so Mary’s family sets out to punish this wickedness out of them through torturous prayer sessions that involve them kneeling on uncooked rice. Presiding over their punishment is Mary’s grandmother The Matriarch (Judith Roberts of Dead Silence), an intense and cruel woman who becomes target #1 when Mary and Eleanor start plotting a way to get revenge on the family and free themselves from this horrific situation.

That sounds straightforward and easy to follow, but there are levels of strangeness to the story beyond that. There’s the guard Theodore (P.J. Sosko), who is forced to watch the family’s property, faces bodily harm if he attempts to quit, and will do anything for a loaf of a bread. There’s the little book that Mary’s father brought into their household, filled with parables that reflect what’s going on with Mary, Eleanor, and characters around them. And there’s the poisonous method the women choose to use against the family, which functions in a way I didn’t quite understand. Any slight bit of exposition on these things was delivered in whispers and metaphors, so there are aspects of the story that remained baffling to me throughout.

In addition to the unclear story elements, another thing that makes The Last Thing Mary Saw and its glacial pace difficult to sit through is the dark, heavy atmosphere that hangs over every scene – but given that we’re talking about a horror film, an uncomfortable atmosphere is a positive. We know things are going to go terribly wrong for Mary and Eleanor, since the film begins with a blindfolded Mary being interrogated while blood runs from her eye sockets, but we have to stick with the movie to see how badly it will turn out. Vitaletti kept me hooked to see how things would fall apart, and Scott, Fuhrman, and the intensely creepy Roberts held my attention. This despite the fact that we’re not told much about Mary and Eleanor as characters, and given little reason to care about them aside from them being less awful than most of the people around them. The actors do well with the material they were given, which wasn’t always a great deal because the characters in this film are very subdued. Even the death of a loved one appears to be nothing more than a mild disappointment to these people.

One actor who livens things up when he appears on screen is Rory Culkin, who arrives late in the film as a character credited as The Intruder. The Intruder may be a scumbag, which is no surprise in this movie, but Culkin turns in a captivating performance during the minutes he has to bring the character to life.

The Last Thing Mary Saw is an interesting debut for Vitaletti, a well put-together film that is certainly unique. Its brand of uniqueness is just not one that appealed to me, even though the cast did. Not only was I wanting to see something more happen throughout, I also wanted to have a better understanding of the things that were happening, and Vitaletti didn’t want to provide information or convey it in a clear way. The movie has a tone and style that will draw some viewers in, but I found the execution of the story to be off-putting.

The Last Thing Mary Saw had its world premiere at the Fantasia Film Festival. Shudder will be releasing the film in 2022. 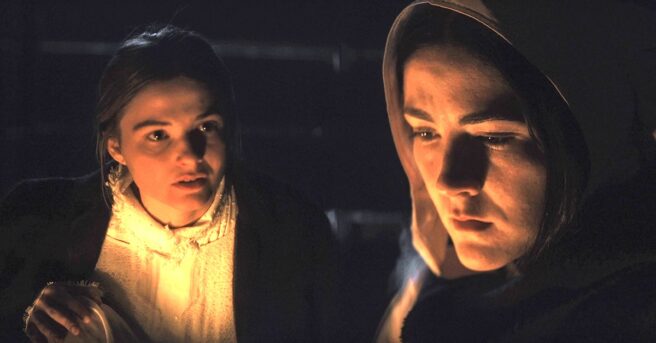