PLOT: A couple vacationing in Mexico meets a free-spirited couple, and after enjoying their week together are forced to deal with their antics back in the real world.

REVIEW: Vacation Friends is the brand of comedy where its three solid laughs are widely spaced out between modest chuckles that you’ll probably only give out of pity. Over the six years the movie was developed, and across the five credited writers who took a crack at the script, all the funny was zapped out and replaced by generic odd couple antics that hint everyone involved just wanted to get it off the line, even if the cast does what they can to make it look like something at all.

Playing the straight, level-headed couple, Marcus and Emily (Lil Rel Howery and Yvonne Orji) must spend the week on vacation with free-spirited, drug-taking, no-rules-having couple Ron and Kyla (John Cena and Meredith Hagner) when their own room is trashed (by Ron and Kyla). The lack of inhibitions from the latter couple make them real-world crazy but vacation-world smart, so Marcus and Emily get over the initial personality clashes and embrace the care-free vibes, and thus go nuts.

Maybe good for one of the solid laughs (involving a wide-shot boat crash), a large chunk of their time in Mexico is supposedly meant to be entertaining in that cheap way of thinking that, because you’re watching the actors have fun in a montage, that you must be having fun too. The rest relies on whatever Ron and Kyla say that proves they have a lack of a filter, with director Clay Tarver solidifies nothing in the way of comedic momentum hinting that anything going on is supposed to be funny.

And that, in essence, sums up what audiences are supposed to find funny about the entire premise. As Marcus and Emily gear up for their wedding seven months after their trip, Ron and Kyla insert themselves back into their lives, shaking up the lavish affair with their un-lavish ways. Ron wins over Emily’s father, who disapproves of Marcus, giving him the ability to join in on events that go exactly where you expect them to go. There are bits where Ron does something in a way Marcus doesn’t approve, and after stacking minutes where there’s no real joke being told, Marcus eventually comes around. The same goes for Emily when she hangs out with Kyla, although the two have less to do as the script saves the big swings for Ron and Marcus.

Out of all the pro wrestlers turned movie actors, John Cena is the one who can take himself the least seriously. That makes him a perfect choice when you need someone to play a character who is an unpredictable goofball but also needs to look like he was once a Green Beret. Howery doesn’t have much to do except disapprove of Ron’s antics, and while it’s good he’s stepping out of supporting roles, this doesn’t make full use of what he’s capable of. Hagner gets the better funny lines, leaning into the humor of her and Ron’s dynamic a bit more naturally. While Orji’s Emily isn’t completely on the back burner, no one seemed to know what to do with her, and she’s left doing the same level of reacting to Ron/Kyla’s antics as Marcus, but with fewer effective opportunities to do so. As an ensemble, they’re trying, and their efforts can sometimes shine through even the more meandering sequences where less enthusiasm would’ve been purely soul-draining.

Of course, there’s the eventual win-over, when Marcus and Emily realize there’s some good in letting new people and ideas into your life. But it’s a lesson stumbled upon to wrap things up, and not genuinely earned. In trying too hard to show Ron/Kyla’s lifestyle clashing with the well-to-do nature of the wedding festivities, there’s no time to really explore anything thoughtful. The same goes for any even-handed growth. Marcus and Emily sure learn a lesson, but Ron and Kyla sure don’t. There aren’t consequences for their more inconsiderate actions, hiding under the guise of “Well, it worked, didn’t it?” It’s like an entire philosophical exploration of “The ends justify the means” wrapped up in a disposable comedy most people will watch while folding laundry. The message becomes less “Let new people teach you new things” and more “Stop being such a tightass all the time and do this cocaine.”

The poster featuring a smiling and happy Cena and Hagner juxtaposed with the nervous Howery and Orji sums up exactly what this movie is selling. It’s all about how much you’ll enjoy the former two shaking things up or saying inappropriate things alongside people who have a “well I never!” vibe. One couple is weird, the other is more strict. Do with that information what you will. 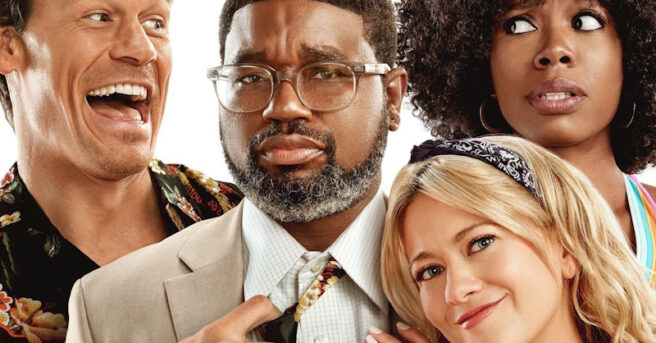